Medal Race, and on to Medemblik

Today I sailed in my first medal race (the final race for only the top 10 finishers). Out of a fleet of 14, that's not saying a whole lot, but it was still a great experience. Medal races are shorter than normal, and are usually windward-leeward, not trapezoid like the boards normally sail. As a contrast to yesterday's 30 knots, today started at about 5 knots of breeze.

My medal race almost became a disaster. I had a good start with clear air, but I went to the wrong side of the course along with one other senior girl, Ania. I was last around the windward mark, but had a really strong downwind. There were some planing puffs coming through so we were all trying to stay in those, jibing three or four, or five times per short downwind. On the next upwind, I made up four places by tacking on two shifts and again hitting the left side, the strategy which didn't work the first leg, but was good this time! Ania, who had also gone left, and I match raced downwind. After aggressive jibes, I beat her by a second and finished 6th. Not bad for catching up. Overall I was happy with how I sailed the race. 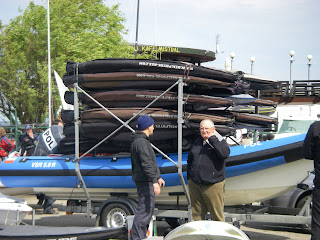 After the racing, there was a flurry of activity packing all the gear. I had to run around trying to find my ride to Medemblik, where the Delta Lloyd regatta will be held. Once again I had irresponsibly not found housing, because I wasn't sure what my situation would be. I am going there with 3 other Polish guys, ages about 19-21, on the youth team (who are also really disorganized), and somehow I ended up in charge of them....so all evening I was scrambling to find housing. I booked something over the internet, but I'm not sure it went through. We'll see. On to the next regatta!

My gear is going with the coach boat from Mragowo. 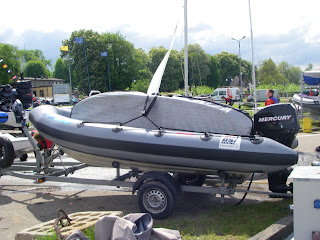