The Sailing Olympic Test Event was the fifth Aquece test event to be held in Rio de Janeiro after volleyball, rowing, triathlon, and equestrian.  The test events are ongoing through February 2016 as part of both organizers’  and athletes’ preparation for the Olympics Games.  At this event, the focus of organizers and ISAF was to make sure the racing was executed efficiently and smoothly and the recent negative press surrounding the pollution issue in Guanabara Bay was controlled.

In the two weeks before the sailing test event, the pollution at the Olympic venue again became a hot topic.  Many reporters were on scene after the racing attempting to get quotes from athletes to back up their stories about pollution. The reporters were sometimes quite aggressive in trying to get sailors to say what the press wanted to hear.  Many athletes viewed this as a distraction and instead supplied reporters with quotes about good competition and interesting weather conditions, if they felt like speaking at all. 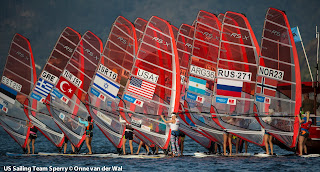 Guanabara Bay is polluted; all sailors know it to be true.  The physical levels of garbage floating around where we race near the mouth of the bay aren’t as bad as they are made out to be.  However, there is a pipe spouting out raw sewage right into the Olympic harbor at Marina da Gloria, and the level of bacteria and viruses in the water would shut down any of my home beaches on the Chesapeake Bay.  Although water quality is bad, the reality is that none of it will prevent the Olympic sailing event from happening as planned, and it won't impact athletes' focus and training on Guanabara Bay.  A few sailors have contracted infections from the water, but more have gotten sick from non-Guanabara Bay related causes.  Getting sick is a normal occurrence for visitors to a tropical country like Brazil, and it is part of the reality of competing there.  I was sick during a small pre-regatta before the Test Event, which set my training back (I blame the salad).  It’s a very frustrating experience but even if an athlete is in a fully closed team environment, there is no definite way to prevent sickness other than the usual traveler’s precautions.  This year, the Rio de Janeiro government is planning to divert the sewage pipe and continue its efforts to physically pick up trash with “eco-boats.”  The bay will still be quite polluted, but hopefully the direct source of sewage in the marina will be removed.  The sailing events currently seem to be well organized and with ISAF’s eye on the pollution at venue, we should anticipate good racing for the Olympic Games with hopefully no water-related illness.  If sailors get infections from the water at the Olympics, it will be quite an unfortunate legacy for Rio de Janeiro.

On a more positive note, the Olympic venue is very attractive and pleasant.  Half is still under construction with a large building going up for athletes, staff and press.  The boards’ tent is located directly on Flamengo Beach, with plenty of shade and a large rigging area.  A hill near the athletes’ lounge makes for great viewing of racing on the Sugarloaf course, no boat needed.  There are grassy areas and trees, and it’s altogether a pleasant place for boat work, launching, and hanging out. 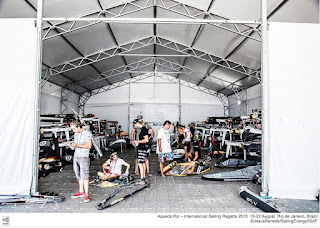 View of the inside of the boards' tent
Rio is a complicated place for racing, and there are a lot of factors at work in the venue.  Current, pressure, topography, and thermal heating all play different roles in this area.  Most teams have been frantically working to try and discover patterns, and boats have been everywhere in the course areas taking data during the pre-event training.  Teams have also been hanging out on top of the Sugarloaf Mountain tourist viewing area, as it offers a fantastic view of all the course areas.  On one day during the event, so many officials were hanging around with their expensive equipment that security decided to put a ban on tripods.  I spent most of my free time at the Test Event studying weather and current, which is an enjoyable pastime for me and I am getting a good understanding of the area. 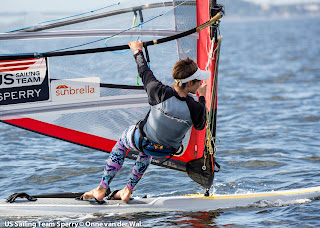 Photos: US Sailing Team Sperry
I experienced some setbacks during the event. I’ve been home exactly five days out of the last ten months, and some of those months have been very stressful in terms of funding, logisitcs, and equipment issues.  One skill I’ve developed is the ability to be happy under these stressful circumstances, but I still get a level of burnout and that’s what I experienced during this regatta.  It was an important experience for me, because I’m really used to continually running on the treadmill keeping my campaign going and it’s been my level of “normal” for years.  I need to remember that it’s not what most sailors experience because they have more support or a better balance in their lives. I need to back off, create more rest and planning time in the upcoming months, and let what I’ve learned this year get absorbed. 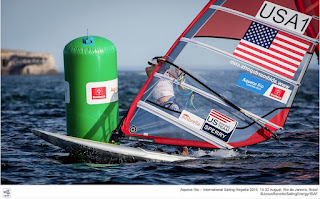 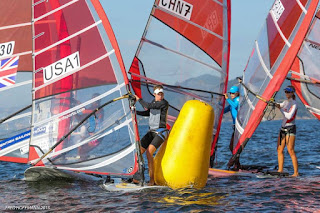 I’m looking forward to my next training block in France in advance of the RS:X World Championships in Oman.  I have a good schedule planned out and I’m really looking forward to being back in Europe.  After my rest at home, it will be good to be back in action and regaining confidence.
Posted by Farrah Hall at 2:42 PM No comments: