Windy conditions at a Florida regatta isn't always a certainty.  Although Miami usually has good wind, this weekend didn't have the conditions we would have liked to see.  The wind was from the east and averaged about 5 knots.
Although this meant that the Formula fleet didn't race, we did get to hang out on the water and go to some good parties.  The race organizer, Alex Morales from Windsurfing Tour Miami, made sure we were well fed and entertained.  There was lots of opportunity to discuss fins, new sails, and the new production boards. 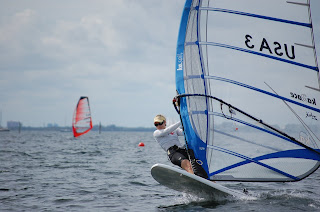 Working the board to make it plane 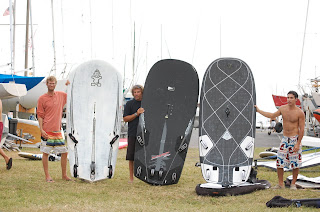 New production boards from Starboard, Exocet, and Patrik Diethelm (formerly at F2)
On the other hand, the Kona fleet sailed 7 races in the light wind.  There was much cheering and heckling from the idle Formula sailors as the boards raced.  Close racing was had by the top 3 men, and after a protest, former world champion Bruce Matlack was upset by Mike Rayl for second place.  Steve Gottlieb from Sandy Point Progressive Sports took first.  In the junior fleet, developed by Britt Viehman, Kevin Hendrickson, Chris Waldo, and Margot Samson took first, second, and third. 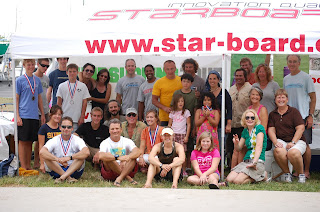 Competitors at the Pro-Am
Posted by Farrah Hall at 5:32 PM No comments:

Getting Ready for a New Season

I've been back in the USA for over a month now, and have spent the time getting ready for the winter season, and making longer-term plans for next year's campaign.  It takes some time to get organized and ready for the next session of training, and I also needed a little down time to relax and get re-acquainted with family and friends.  Of course, the work is endless, and I've been putting a lot of office time in, as well as cleaning out all my old stuff from my parents' house!
I just made it to Miami, where I'm getting organized once again for the winter.  My RS:X gear arrived safely from Weymouth in the US team container, and was waiting for me at the US Sailing Center.  I am also getting my Formula equipment sorted out and the new KA Sails prototypes are looking great.
Tomorrow is the first Formula regatta of the season, the Miami Pro-Am.  The local scene will be here, so it will be competitive and fun, and a great warm-up for the bigger regattas.  I am looking forward to a lot of Formula sailing this winter!
Thanks to my sponsors, Compass Marketing and KA Sails, who will make this season exceptionally great. 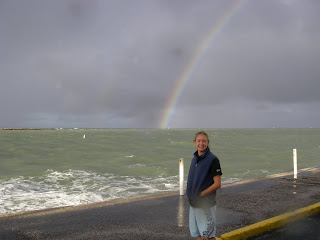 A little Florida winter weather - the morning before a great day of sailing
Posted by Farrah Hall at 11:15 PM No comments: