During the last few weeks, I competed in two Eurosaf (European Cup) events, the Garda Olympic Week at Lake Garda, Italy, and the Delta Lloyd Regatta in Medemblik, Netherlands.  Both events were "filler" for the season, as my peak was the World Cup events earlier this spring.  However, I used the events to determine the next steps for my racing, and to attempt to win funding for next year. 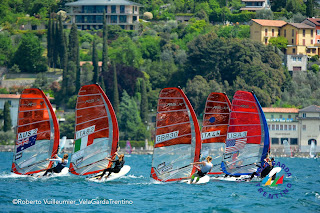 Because the Garda Olympic Week and Delta Lloyd Regatta aren't World Cup events, the number of races and format were slightly different, but were still a spinoff of ISAF's World Cup test format.  The boards were scheduled to race 17 races over 5 days, meaning 4 races per day and one medal race on the final day.  Although the number of races was high, the courses were a bit shorter and during both events, conditions permitted four races per day to happen easily.

Although the regattas progressed as planned, with 3-4 races per day and only one day of waiting for wind in Lake Garda, ISAF's new scoring system again proved itself to be flawed.  At the Garda Olympic Week, despite winning 10 out of the 14 series races, British sailor Bryony Shaw finished in second place due to the "carry forward" scoring between the race series and the medal race.  In the men's fleet during the Delta Lloyd Regatta, Dorian van Risselberghe, the 2012 Gold medalist, again won the majority of the races.  Although he was in first going into the medal race, a poor finish removed him from the podium altogether. 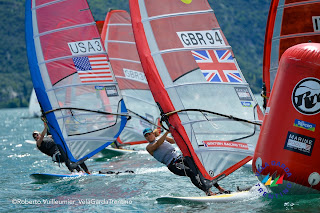 By using placement as points and condensing the scoring so there is only one point between each sailor, ISAF's new format simply does not reward consistency of results during the regatta series.  What, then, is the point of trying to complete 16 races in four days before the medal race?  The number of races simply is too many for no payoff in points whatsoever in the medal race - the same result can be had after three or four races.  The priority for any event should be to promote fair competition for all sailors, and easy comprehension of scoring for spectators.  Weighting one race more heavily than all the rest doesn't reward consistency of finishes and "quality" sailing.

As for my personal experience, I underperformed at each event.  However, it is no longer a mystery to me why.  I worked with a Spanish coach during Medemblik, and essentially, a new door is going to open for me soon in terms of tactics.  The speed I developed this winter is pretty good, but I have been making errors I wasn't aware of.  My new homework is to accelerate learning this element of competition. 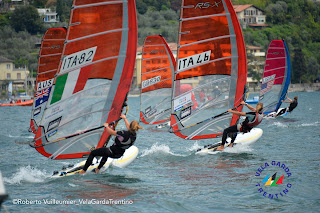 I did enjoy aspects of the competiton.  I liked the three four shorter races because there was room for less error, and thus mistakes were more visible.  Lake Garda is truly a windsurfer's paradise, and we had warm, sunny weather while we were there, which made for good wind and great racing.  Medemblik was windy and choppy, but very cold!  Temperatures were in the high 40s/low 50s with plenty of rain, and one morning I arrived to find ice covering my equipment.  Although it was the coldest event I've ever been to, I learned a lot about tactics!

I'm now back in Maryland for a short break before our European Championships in Brest, France.  I am looking forward to this next event as tactical training and a chance to win additional funding.  Brest is a tricky spot and will be a great opportunity to learn.

Posted by Farrah Hall at 2:57 PM No comments: 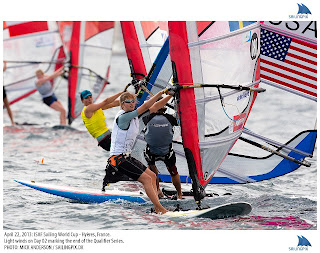 Posted by Farrah Hall at 5:29 AM No comments: