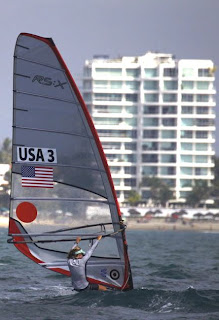 The U.S. earned silver in the J/24, Lightning, Snipe and Sunfish classes. Bronze went to the Americans in the Laser Radial and women’s Windsurfing classes. Each class raced just once today with double points on the line to decide the medalists.

“We had four medals secured yesterday and we were able to close out two more medals today for six total. That makes us really happy,” said U.S. Sailing team leader Dave Johnson. “A lot of these athletes don’t get to necessarily compete at the Olympic level, but the overall level of world-class sailing was definitely shown here by the Americans. Our sailors were able to perform, and it’s pretty exciting to see that.”

While he was disappointed to not bring home the gold, Jody Lutz enjoyed his Pan Am Games experience. “It was such an opportunity to represent the U.S. It was something that us ‘old guys’ don’t get a chance to do very often. The class that we sail, the Lightning, is not in the Olympics, so this is our Olympics,” he said. “To have the support of the U.S. and all the staff that’s involved here was tremendous. I’m disappointed that we weren’t able to bring the gold home to everybody but I’m proud that we did it right and we acted properly and competed fairly. We did the best darn job that we could.”

The 16 athletes qualified for the US SAILING 2011 Pan American Games Team after winning a select regatta previously determined as a qualifying event for each class. US SAILING’s Olympic Sailing Committee then submitted its team to the U.S. Olympic Committee (USOC) for inclusion on the 2011 U.S. Pan American Games Team. Athletes must be U.S. citizens to qualify for the team, members of US SAILING and the classes in which they compete.

For more information on the 2011 Pan American Games in Guadalajara, visit the event website:

About US SAILING Founded in 1897 and headquartered in Portsmouth, Rhode Island, US SAILING is a 501(c)(3) non-profit organization. US SAILING offers training and education programs for instructors and race officials, supports a wide range of sailing organizations and communities, issues offshore rating certificates, and provides administration and oversight of competitive sailing across the country. For more information about US SAILING, please visit: www.ussailing.org. For more information about the US Olympic Sailing Program and the US Sailing Team AlphaGraphics, please visit: http://sailingteams.ussailing.org.