The Formula Worlds ended Saturday, with frustration for some and elation for others. The difficult logistics and earliness in the season set a few pro sailors back, as they were working with unfamiliar new equipment or older sails, but those who came tuned up fully experienced the epic sailing conditions of Lake Potrerillos. Everyone thoroughly enjoyed the extraordinary venue: racing on a clear lake in powerful gusts of wind, red-brown mountains towering above the racecourse, and the dry, strange, incredibly vast land. 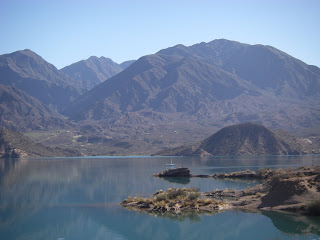 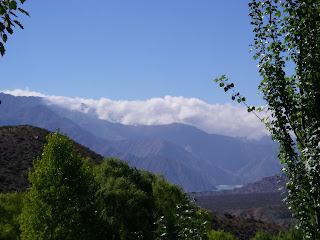 Lake Potrerillos (lower right) from our mountainside cabin
After a few years’ absence from the Formula circuit to focus on slalom, Frenchman Antoine Albeau dominated the men’s fleet with seven bullets out of fifteen races. From his attitude, it seemed he was having incredible fun the entire regatta. Top pro sailors Paulo Dos Reis from Brazil and Ross Williams from the UK followed, with scores numbering twice that of Antoine’s. My Polish teammates performed masterfully as well. Sopot sailor Pawel Hlavaty finished fifth, and three-time Olympian Przemek “Pont” Miarczynski finished seventh in the 62-boat fleet. Longtime pro sailor Wojtek Brzozowski finished eleventh. All three sailors have spent time on the Polish Olympic Team. Another extremely fast Olympian from the Netherlands, Casper Bouman, finished fourth. The advanced level of Olympic windsurfing allows the sailors to easily cross over to be successful among the professionals in the Formula fleet. 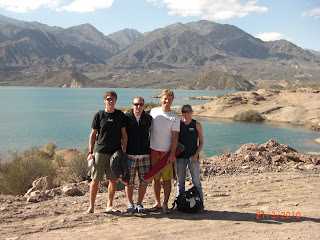 Pont, Pawel, Wojtek, and I on the way to the venue
I took another third place in the last race of the regatta, further ensuring my place on the podium. Marta Hlavaty once again reigns as third-time World Champion. Her combination of excellent sailing skills, good equipment, and great attitude well earned her the spot. Morane Demont, a young and skilled French sailor from Martinique, finished second. 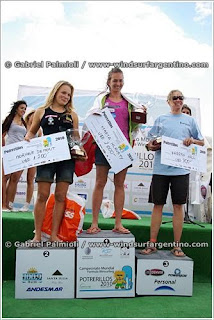 On the podium (yes, that is a big check!)
I finished up, according to my Slovak friend Patrik, as the “vice vice world champion.” It was somewhat emotional for me, as I’ve never had tangible evidence of my progress in sailing. The organizers gave us each a cup weighing at least 15 pounds – pretty heavy evidence (in the airport, I dropped it on my big toe, and my toenail is bloody and turning blue). I fully enjoyed the moment of celebrating how hard I’ve worked at sailing Formula. Backing my finish is five extremely difficult years of fighting for small improvements, learning from mistakes, stress, and sheer survival as a full-time sailor (you still can’t beat the lifestyle). I feel that Formula is something I completely own. It’s individual enough that I don’t feel constrained and difficult enough to really challenge my sailing and equipment tuning skills. Plus, it’s incredibly fun racing and adds depth to my Olympic-class sailing.
Posted by Farrah Hall at 10:30 PM