Formula Worlds Day 4: Living on a Foreign Planet With a Familiar Country

Living with the Polish is funny, and a little predictable. One can always count on the guys to be up to some mischief, but their normal habits are a familiar reminder of the country I've apent so much time in. Breakfast is typical East European: open-face sandwiches on rolls or sliced bread with tomatoes, cheese, and ham. We arrive at the venue at the last minute, rig and de-rig efficiently, and are among the first to leave. We make dinner as soon as we get home, and the boys expect the girls to take care of them by making the food. Since there are no supermarkets on Mars, we stocked up on pasta and veggies in Mendoza before the regatta. Marta makes the pasta, and I make the salad. We set the table and the boys come to eat. Afterwards, there is some debate over who is responsible for the dirty dishes. In the evening, we rest or sit around the table with some beer or vodka. The guys are relaxed, but take the racing seriously.

the men lining up to start
The men's team includes a few guys from Sopot, including the top Polish RS:X sailor, and two other really good Formula sailors. Another longtime professional sailor from Warsaw rounds out the group. I am competing and rooming with Marta Hlavaty, the 2009 Formula World Champion and Polish Olympic Team member. All the sailors are enjoying the regatta to the max. 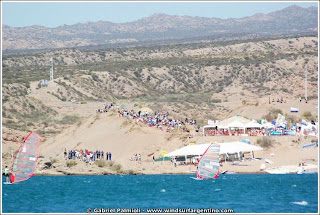 a good view of the venue
We sailed three races today; two in very windy conditions and one in the gusty, dying late afternoon winds. The wind tends to die quite fast, abd once it starts to go down, it is sometimes too late to change equipment. I had two solid races in the breeze, but I really needed the big gusts to keep the 9.8 powered up during the last race. I switched my fin right before the last start to the 75-5 XXXS (my most powerful fin), which helped a lot. I posted a 3-3-4 today and with three races to go, am pretty solidly in third place. Tomorrow two races are scheduled, and on Saturday, one race. Sailors are looking forward to the conclusion of the regatta. 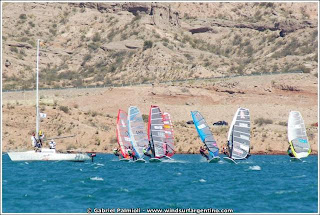 Marta and me (light blue sail) winning the start at the committee boat
Posted by Farrah Hall at 1:21 AM