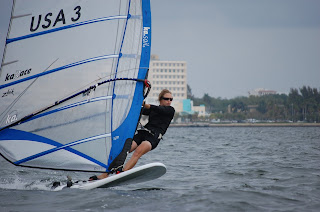 The Miami Wind and Surfers Challenge, held last weekend (April 9-11) saw some great conditions and racing by the local Formula fleet. The event doubled as the Formula Experience North American Championships, and although the kids' fleet has died out in the USA in favor of the Bic Techno one-design class, a couple talented kids from Brazil and Peru showed up to race. 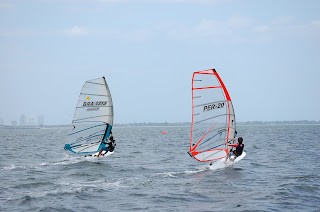 Formula Experience sailors work on their start
Three local sailors participated in the Kona one-design fleet, making for some entertaining and close racing. 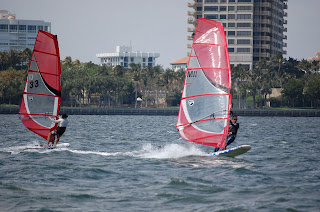 "Kona Man" Mike Rayl and Miami SailLaser manager Roberto Porter cross tacks
Conditions were fantastic for all three days of racing. Wind averaged around 15 knots on Friday and Saturday, dying off a bit for Sunday as rain moved in. Our event organizer, Alex Morales, in classic fashion, ran the races "PR-style." This meant he modified the course to provide the best photo opportunities possible. The short, windward-leeward courses provided fantastic practice for starts and laylines. Alex positioned the committee boat in the middle of the course and required the fleet to sail through the start/finish line on every leg. This made the boards sail close to the boat, making us find two or even three laylines each leg instead of the usual one (and created excellent pictures of the racing for Alex's website). 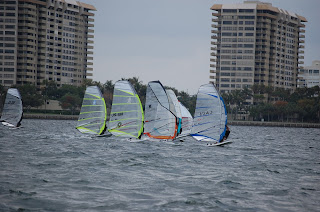 Leading a start
The short course made having a good start very critical. On the first day, I tried to start from a different place on the line each race, and on the following days I tried to start to win the first layline. This was a difficult task competing against the fastest local guys, Ron Kern and Fernando Martinez. I got off the line well for the most part, but they usually rolled me within the first minute or two. Ron and Fernando match-raced after the start, with Fernando having a slight edge on speed, but Ron pulling off some really good tactics to stay close. I was well matched with a Cuban National Team sailor, Raul Elosequi, and we battled it out a number of times. I had an edge with a better upwind angle, but if I made a tactical mistake or he had a better start, the fight began. 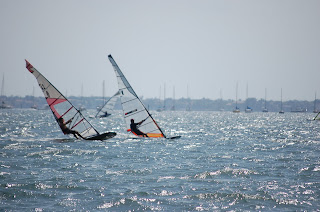 Ron and Fernando dueling
Alex made the start a greater challenge when he decided that he was tired of all the boards starting on port (we were trying to avoid tacking twice to reach the layline). He moved the boat end of the line so far upwind that we couldn't get above it on port tack. Despite general eye-rolling, everyone started on starboard. With the steep starboard angle, it was more difficult to nail the best place on the line while keeping the other boards in mind, but a great exercise in timing. 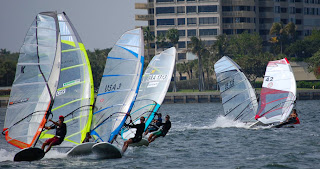 An exciting start on port tack (I'm about to get pitched in the water)
I finished third, a nice follow-up to the Formula Worlds. 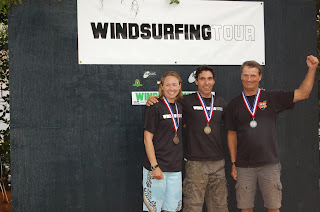 (left to right): me (3rd), Fernando (1st), and Ron (2nd)
The event was well organized and really fun thanks to Alex Morales and Simona Madan. Also a big thanks to my great sponsors, Compass Marketing, and KA Sails, for making all my events exceptional.
On Sunday, I leave for the French Olympic Week, my first major RS:X World Cup event of the season. As I've made some real improvements this winter, I'm really looking forward to starting the Olympic Class events.
Posted by Farrah Hall at 8:48 AM