The Alex Caviglia Bluewater Classic, held at the Shake-a-Leg sailing center in Coconut Grove, is usually a good draw to get Formula sailors to Miami for a few days to enjoy the warmer weather and practice for bigger events. It's a treat for the local sailors to train with a lot of good guys, and see the latest and greatest in Formula equipment upgrades. On Friday at the causeway (our normal sailing spot) everyone had a productive afternoon testing gear and tuning up against each other in big lineups. Formula testing is a lot of fun and very technical, and it's easy to see which guys have the best equipment combination or who has the gear most tuned up. Afterwards, we have big discussions on the beach. 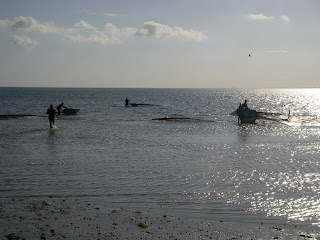 Sailors changing equipment at the causeway training session
Dave Kashy and Alan Bernau, part of my team from Maryland, showed up after driving all night. Dave brought some new fins, which a few riders tested. Of particular note was an "85-15," which is a fin made to be 85 cm long, then cut down to 70 cm as per Formula class rules. The big fin, tested by a Brazilian pro rider, showed some impressive light wind performance in the lineups. It sent the pro sailor upwind like a rocket, gaining in every gust. 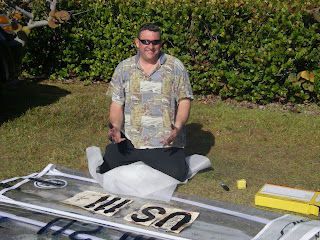 Alan has black Sharpie hands after stenciling his sail numbers
The training session took place in light wind, which was very different from the conditions we experienced on the first day of the regatta. In the morning, we had 20-25 knots of breeze from the southeast. Many Olympic-class boats were out racing, and the bay was cluttered with their courses and other powerboat traffic cutting through. The committee ran a windward-leeward course, simple enough, with a far upwind mark near Key Biscayne. They had to move the course once, while we waited. Finally, they ran one race. The race was a good experience and challenging dealing with tidal current, gusts, the ever-present weeds, and big San Francisco-type chop throughout the upwind half of the course. I kept everything under control and finished 9th. 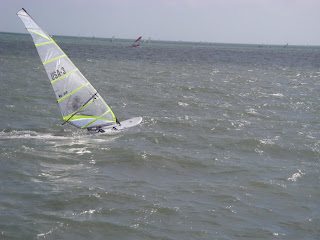 Just after a leeward mark rounding in the breeze (you can't really see the 20 knots)
After lunch, we went out again only to find that the wind had dropped dramatically. Everyone was on their small gear with no time to change sails or fins. The Shake-a-Leg launch is notoriously difficult as we have to tack up and down a narrow channel without a centerboard, and the course is too far from the launch to have time to do this. After one race in very light wind (barely planing, and fighting weeds), our third race of the day was abandoned and everyone drifted back to the beach.
Conditions on the second day proved equally frustrating. The wind was a beautiful southerly when we went out, but a big storm system moved in and at the last minute of our start, the wind shifted southwest and it began to rain torrentially in that tropical way. We sailed in and waited a few hours, then went back out to light wind. We had one race in the type of conditions I enjoy, light wind planing with big shifts and gusts. This makes for interesting, challenging racing which you have to strategize for before the start. However, the wind died at the beginning of the day's second race, and we drifted around the course.
The forecast for the third day wasn't looking good for the Formula fleet either, and after waiting for wind in the morning, we went out to have the wind die shortly before our start. We started anyway, and ended up slogging around two laps of the course. I got on the wrong side of a few shifts and had a frustrating first upwind (imagine sailing this board and huge, stiff sail, tacking like a boat would sail a race), but had a good second upwind.
I placed mid-fleet overall, which is a good result sailing against a lot of these fast guys, and am pleased with the way I am racing in the Formula fleet. I was a little frustrated by how the race committee handled the conditions. Formula is a planing class, and races where 90% of the fleet can't plane should be abandoned. On the first day, instead of sending the Formula fleet back in for lunch, two more races could have been accomplished for the day while the breeze lasted. Also, on the second day, if the fleet had waited on the water for the wind to switch, two or three planing races could have been accomplished. It is impossible to run races for Formula as if planing boards were sailboats.
I feel happy about the way I'm sailing against some of the fast Florida guys, and I can see myself creeping up closer to them in training and results. I'm looking forward to my new 2010 KA sail quiver and making even more improvements in Formula speed and technique.
Next week the Miami Olympic Classes Regatta begins and I'm looking forward to another few days of RS:X training. Thanks to my sponsors, Compass Marketing, and KA Sails, for helping me realize these sailing goals.
Posted by Farrah Hall at 3:54 PM