Days 2 and 3 of racing went by really fast for me.  I had a bit of another frustrating day on the second day, as the wind was very shifty and marginal.  The low pressure finally moved on, and the wind dropped to manageable conditions. The girls raced first, and I managed two 20th places, which I knew wouldn't put me in the gold fleet after the qualifying series, as was my goal for the regatta.  It was really unfortunate that I hadn't made the time limit on the previous days' races and scored DNFs.  After I got home and warmed down from the racing, I became quite sick with flu-like symptoms and went to bed early.
Sometimes feeling like crap can be really helpful, because I wasn't feeling so pressured for yesterday's racing.  The wind was marginal again but enough to fully plane downwind.  It was coming from over the mountain of the island of Portland, making the course pretty gusty, and racing was all about staying in the pressure.  I quickly discovered the secret of a successful race:  don't go course left unless there was serious breeze visible.  Course right was favored and most of the girls went that way on the upwinds, but downwind many were tempted into chasing stray puffs on the left.  I went hard right on the downwinds and many times came out ahead, ending the day with a 16th and 12th place.  After 3 days and 6 races, the qualifying series is over and we are now split into gold and silver fleets according to scores.  Although I had a "gold fleet" kind of day, I didn't make the final cut. 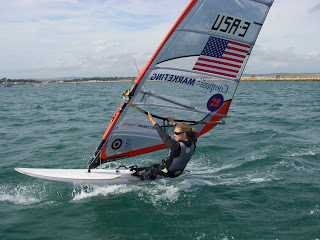 Sailing home from the day's racing
When I finished the second race of the day, the measurement boat motored up and told me that my equipment would be inspected.  I then got to de-rig inside the measurement area of the Academy facility.  Guess they got suspicious of me after a good day of racing.  I passed the inspection free and clear. 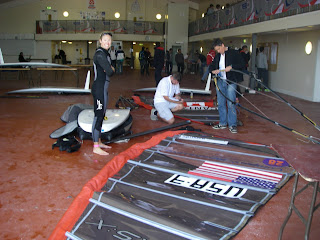 I'm class-legal, I swear
As the qualifying series ends, there is no doubt who is on top:  the Spanish team.  Their top girl, Marina Alabau, is head and shoulders above every other sailor here in terms of speed and good decisions.  She has posted a perfect score of 6 points for 6 races, meaning she's won every race.  Five points behind her is the next Spanish girl.  It is very impressive, as the two have a reported close rivalry and have been pushed to train together lately.  Both have obviously risen to the challenge both mentally and on the water.
Among my Polish "teammates," the top youth girl, Maja Dziarnowska, has also risen to her new challenge of being on the Olympic team.  Her career is just starting, but already she has had some seriously good races and is much faster than last year.  Another girl, Agata Brygola, who didn't make the Olympic team a few years ago (but never gave up racing hard under her own resources), is now in medal contention.  Overall, it is very impressive how fast some of the girls in the fleet have improved, and it gives me more motivation to keep up!
Today is our lay day and I'm feeling a bit sick again, but have been resting.  I'm sure that by tomorrow I'll be ready to go and will have some good races in the silver fleet.
Posted by Farrah Hall at 2:31 PM