The last few days of Sail for Gold saw many American sailors stepping up the game and moving to the front of the fleet.  Two bronze medals were won by Zach Railey in the Finn class and by Anna Tunnicliffe, Molly O'Brien-Vandemoer, and Alice Manard in women's match racing.  US sailors swept the Paralympic division, with two gold medals in the Skud - 18 (Scott Whitman / Julia Dorsett) and Sonar (Hugh Freund / Maureen McKinnon-Tucker) classes.  My teammate Ben Barger had one of his best performances ever, with 9th overall in the RS:X men's fleet.
The final days of the regatta saw all the changeable conditions possible in Weymouth.  The third day many classes had a break as the wind was too strong on the outside courses (which I've written about in the previous entry). 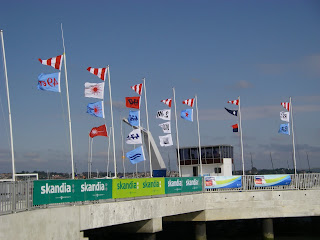 All fleets postponed for winds gusting over 30 knots.
Although it was really nuking for the first few days, the wind dropped a lot for the last two days of the final series.  We experienced a few days of Indian summer and four races in winds of 5-10 knots. 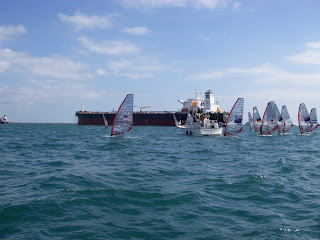 Running through the starting line in light wind
The last day of the regatta was going to be a treat as I would get to watch my teammate Ben  in the RS:X medal race.  However, hot, hazy summer decided to descend on Weymouth, and conditions were pretty glassy all day.  Even though there was no wind, the committee decided to call the men out anyway.  After about 15 minutes of everyone hanging out on their coach boats, they decided to abandon the race.  Many fleets had their medal races cancelled, which was a disappointment for the huge British media presence. 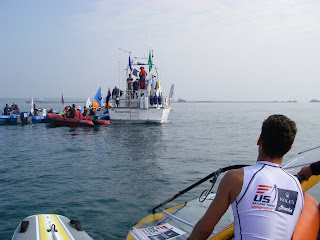 On board the coach boat:  Race committee member tries to hold up the "A" flag
I had a lot of frustration these last days as being tired and sick was starting to catch up with me.  The wind was very shifty and light, making for a difficult transition back to pumping conditions.  My focus every day was on recovery, and some new stretches I learned facilitated that.  Although I didn't sail as well as I expected I could for this regatta, it was still a great experience to be at the Olympic venue for such an extended period of time, learn all the possible conditions, and be well-prepared for each coming year.
I would like to thank my sponsor, Compass Marketing, for making these important events possible for me to compete in.
Farrah
Posted by Farrah Hall at 4:39 PM