The Worlds have finally concluded yesterday with beautiful weather for the medal racing. Medal races can be high stress, as the weighted results can make or break a sailor's regatta.  We saw some seriously good sailing today with impressive finishes.  In the women's fleet, Marina Alabau from Spain sailed conservatively without any big mistakes to keep her points lead for the World Champion title.  Her teammate, Blanca Manchon, finished fourth, also maintaining her second place.  Charline Picon of France upset Agata Brygola (POL) to take third. Agata has had a phenomenal regatta, and after a year of not being on the Polish Olympic team, has completely risen to the top.
In the men's fleet, local British sailor Nick Dempsey impressively won the medal race and the championships, thrilling the British media.  The second place finisher, Nimrod Mashiah from Israel, almost lost his regatta in the medal race after he fell at the start.  As he went down and the gun went off, there was a collective gasp of horror from all the spectator and coach boats.  He recovered quickly, although he was behind the entire fleet.  By the first windward mark, he was going so fast that he caught three sailors to finish sixth, keeping his points lead.  Dorian van Rijsselberge, a very talented kid from the Netherlands, finished second in the medal race to take third place. 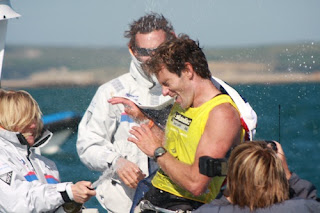 Nick Dempsey (GBR) is sprayed with champagne after winning both the medal race and the World Championships (event photo)
The racing for the silver fleet was cancelled on the final day, much to everyone's disappointment. A container ship was hanging out on the racecourse, making a normal trapezoid course impossible.  The committee was running one fleet at a time on a windward/leeward course, and with four fleets to finish, they ran out of time before the medal races.  I went sailing anyway and blazed around the slalom course for a while between races, practicing jibes.
We have a few days off and then the Sail for Gold ISAF Grade 1 regatta begins.  I seem to have both a small sinus infection and some kind of British disease of the guts, so I'm resting and will do some light recovery running and calisthenics.  Sail for Gold will be another great opportunity to learn more about the Olympic venue and we are (tiredly) looking forward to the racing. 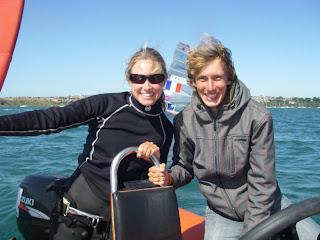 Arne and I watching the action before the medal races