I've had a great few weeks training in San Francisco working on heavy air board handling and technique. The time has been really productive in developing more confidence in big breeze and getting valuable water time applying techniques to improve consistency of speed and control over chop.

The weeks culminated in a local regatta that is one of the most unique events I've ever participated in. Held at the St. Francis Yacht Club, the San Francisco Classic / UltraNectar Challenge is a distance race that spans the San Francisco Bay west to east from the Golden Gate Bridge to Berkeley. Sailors have to get all the way down to Berkeley after racing a two-lap triangle, and they have to do it via a giant slalom that spans the entire width of the bay. This is the "San Francisco Classic" portion of the race. 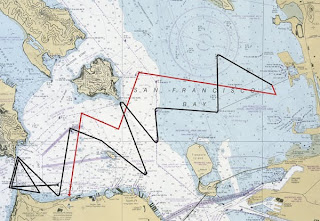 Course map (slalom course is black line)
After the downwind giant slalom, the objective of the second half of the race (the UltraNectar Challenge) is to get back upwind to a finish line at the St. Francis Yacht Club.

San Francisco rolled out some classic conditions for the distance race. The wind was about 15-25 and we began the race in foggy, cold weather. Since the tide was flooding, the chop wasn't too bad and getting downwind was really fast. I really enjoyed the aggressive reaches across the bay and was able to hang with some of the kiters going downwind. Being on the RS:X required a bit more patience, as I was a good deal slower than the Formula boards. It was a good thing the sky was full of brightly-colored kites to mark the way around the somewhat complicated course!

Going back upwind was a bit more difficult against the relatively strong current, which maxed at about 3 .2 knots that day. I planned a route in advance by looking at the tide charts and tacked up the side of Angel Island on the north side of the bay. I managed to stay with the same group of kiters; however, I got too enthusiastic about staying out of the current and sailed into a hole on the west side of the island, losing a few of the kites.

Sunday's racing was normal course racing, normal except that during the last two races the committee combined the windsurfers' start with the kites. Local Formula sailor Seth Besse's advice about the start was to just ignore the kites and start as usual. It's a little concerning when you as a windsurfer can't see the kite lines, but the kite sailors have good visibility and spatial awareness of their equipment.

I really enjoyed racing with the kiteboards and seeing their abilities and tactics. The St. Francis Yacht Club made yet another progressive decision when beginning the kiteboard series and combining it with the windsurfing events. I've never seen a closer and more understanding relationship between kiters and windsurfers than in San Francisco. The forward-thinking attitude towards pushing new improvements and working together in both sports has created a fun and unique community, which is the way both watersports should ideally interact. I am excited to return to San Francisco in September to reinforce some techniques and board handling before the Pan Am Games in Puerto Vallarta, Mexico, this October.

I am now en route to Weymouth, UK, where I will be training prior to the Pre-Olympic Test Event, beginning in early August. I'm looking forward to getting some good time on the water with quality training partners and continuing my adventures on the road to the 2012 Olympics.
Posted by Farrah Hall at 5:33 PM