USA Bic Techno Fleet gets ready for the 2011 Techno Worlds!

On July 17-24, more than 200 kids from 30 countries and 5 continents will descend on San Francisco Bay for the 2011 Bic Techno one-design World Championships, held at the St. Francis Yacht Club near the Golden Gate Bridge. The regatta is a big moment for the USA's windsurfing program, as it will provide a boost to our fledgling junior development program. The windy and rough conditions and dramatic scenery of San Francisco Bay will be an unparalleled experience for most sailors attending, including some of the USA's youth sailors from the East Coast.

Under the leadership of youth coach Britt Viehman, I assisted in coaching a Bic Techno clinic last week for American kids competing at the Worlds. Nine kids showed up, from both San Francisco and Florida. We had abilities ranging from fairly advanced to beginner, which is a typical skill range for American youth sailors. Each group of youth learned something new by participating in the training camp. 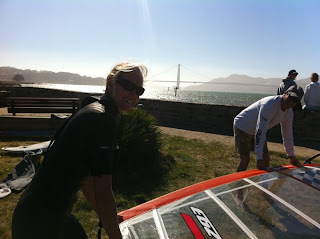 Sailors from Florida were wide-eyed after the first day of training in San Francisco. For many of them, it was the coldest and windiest conditions they had ever experienced. These sailors focused on planing technique up and downwind, tacks, jibes, and planing starts. A major factor contributing to the success of their training was developing confidence in the rough conditions. A few sailors spent time learning to make confident, fast runs upwind and downwind in a straight line, and develop sail handling techniques in windy conditions.

The local kids already had a good grip on the usual conditions, but what they didn't initially understand was the concept of sailing teamwork. For a few, it was the first time experiencing coaching on a schedule, two sessions a day, with a debrief after sailing. By the end of the camp, they were better about being on the water on time and keeping together in a group for drills to learn from each other. All the kids tuned up their equipment in the breeze, and learned more about San Francisco's famous currents - how to start in big current, and which side of the course would be favored by observing the action of the current in various stages of ebb and flood tides.

The only major flaw in the training camp is that it was too short as time and funding are limited at this point. The kids really needed a few weeks at this venue to further develop skills and confidence. However, the stoke was high as everyone is looking forward to returning to the City by the Bay and the Bic Techno Worlds.

(I wish I had more pictures for this blog, but we were really busy! Video coming soon.)
Posted by Farrah Hall at 6:28 PM