A single race was on the schedule for today. The wind was very light heading out to the course, but shifted left and built to about 12 knots, just barely planing. The girls all started daggerboard down and headed over to the left side, which again saw some land effects. I was working on my speed, and overall saw some good bursts of sailing fast and railing hard. My start was great, but after a minute or so I lost my position because I was having trouble with boardspeed. The speed comes and goes, but when everything is fast it feels effortless. However, in between it is a lot of fighting with the board and rig.

The second upwind was planing and I was again having trouble with pointing, not to mention I went to the middle which is a bit of a bad idea in planing conditions. On the downwind I dialed in a few jibes, which I was happy about. 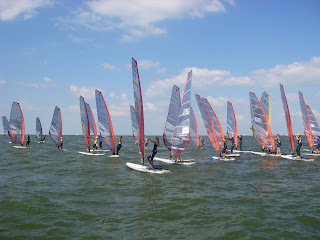 At the beginning of a start sequence
Overall, I and the Polish guys came to the regatta overly tired. We all had a hard time adjusting after the rough drive, and could have used a few days to get tuned into Medemblik conditions. It was a good experience to remember.

After the racing, we packed up the equipment and hustled back to the bungalow to pack our bags. We were hungry but didn't have much food left, and the boys decided to cook everything we had. They ended up with a huge spaghetti dinner with a variety of sauces, from beef curry-something to kielbasa with marinara. There were at least 3 lbs of pasta, which they devoured. We then loaded the car with everything on the left side, including one of the guys who laid on top of the bags, and drove to the venue. We put the bags into the Polish Olympic team's van, and loaded the equipment. Then we were off. 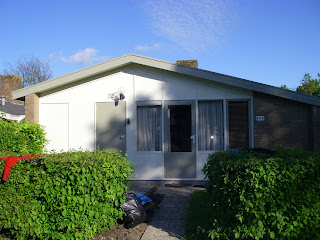 Our domek ("small house" in Polish)
We passed the two Polish cars hauling trailers twice during the beginning of the drive. In the beginning, there was an interesting grinding noise and smell coming from the front brakes and we stopped and looked at them for a few minutes. We decided to ignore the problem, and kept driving. Then we got lost for a bit. Everything was fine for most of the night, and I pulled the really late shift. At about 3:30 a.m., all the boys were sleeping soundly when the car coughed, bucked a few times, and glided to a stop. We had been running on gasoline when it should have been LPG, and we were out. It should have been a simple matter to start the car with LPG, but it wasn't. We ended up running a kilometer downhill behind the car, pushing it when it slowed down and then sprinting to catch up with it. It was a nice wakeup call, and nobody really slept after that. The sky was light anyway.

We made it home ok and now I'm staying at the Sopot sailing club for a few days. This weekend is a small regatta and some training, and after that I go to Kiel.
Posted by Farrah Hall at 8:33 AM