After bouncing around Florida for a few weeks, I've finally found an apartment and am settled in Miami for training. This winter (blame it on the economy), short-term housing has been really difficult to find. Most places are either extremely expensive, unfurnished, or in the "hood." In Coconut Grove, which contains most of Miami's sailing scene, wealthy neighborhoods border lower-income areas by the width of a city back yard....and I've looked at housing in both. I've lived at various friends' places in Miami, Stuart, and St Petersburg, while keeping the car packed and training at the same time. The past month has been a familiar, wearisome adventure that has lasted a bit longer than I wanted it to.
The hassle of finding housing in Miami is a familiar one to many sailors, and our main concern is getting our belongings out of the car and into a safe place. Although we have a free place to store gear and train at the US Sailing Center here, the parking lot has been targeted by thieves for many years. It's tempting to leave your life locked in the car, but the car is the most unsafe place for computers, wallets, and sailing gear. On Sunday, before I moved into my new place, thieves broke two windows of my van and stole a gym bag with wallet, cash, toiletries and clothes. It cost $750 to replace the windows, four hours to clean all the glass out of the car and door interiors, and as a result, my life was disrupted for an additional few days. The money is almost easier to sacrifice then the time lost and stress.
Although my car was the target (along with two other vehicles) this week, my feelings were validated by some experiences related to me by one of the women's 470 teams, who had their vehicles broken into three times. In one incident, their entire car was stolen, dragged away with their tools and a brand-new set of sails inside. The theft was a devastating setback to their campaign. The team has also experienced some difficulties finding housing, and one sailor is cycling daily from Miami Beach, 10 miles away. Miami is a difficult place for everyone, and removing theft and crime, locals and visitors still have to deal with frustrating traffic and angry drivers, poor urban planning and ugly, soulless sprawl, sky-high taxes, and the general insanity created by people of every desperate race and culture crushed together in too small a space. From the outside, Miami is an incredibly beautiful place to live, but on the inside, it is glaringly ugly and superficial, identities crushed together to breed a war for money and materialism. The city is a true paradise wasted, and one of the most troubled, confused, chaotic places I've ever traveled to.
Although the city in general disgusts me, the water is entirely another world. On Biscayne Bay or the ocean, sailors can escape the demented crush of humanity and re-orient to their true purpose for being here. Miami is a fantastic place to sail, and there is plenty of sailing to do. Training so far is going well. Over Thanksgiving, I did a US Sailing Development Team (USSDT) clinic with Britt Viehman's youth team. It is great to see how well all the sailors are progressing. The girls in particular are taking windsurfing very seriously, and are learning new things very quickly. For me it was a good chance to revisit the basic things I never learned as a beginner...like pointing upwind. I made some big strides forward with Britt's help (and some video) and now have a few techniques to work on daily. 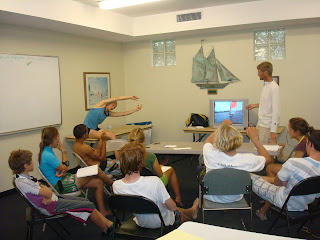 I must be describing something in Britt's video
It is great to see the windsurfers included in the USSDT camp, although it was not without a fight that they were able to get in. Britt's persuasion was a major influence, and windsurfing has an inside advocate, Leandro Spina, a salaried US Sailing Team skiff coach who also trains some Bic Techno sailors at the Miami Yacht Club. Leandro has been pushing hard for windsurfing's inclusion, which is something sorely needed inside US Sailing. If not for Britt and Leandro, windsurfing would never have a chance for success under the current US Sailing Team leadership.
The beginning of the winter sailing season has brought lots to fight for. It's a good thing I have an endless reserve of determination and the ability to fight, both on the water and on dry land.
Thanks again to my sponsor, Compass Marketing, and for so much community support of my Olympic campaign.
Posted by Farrah Hall at 8:12 PM