RS:X Worlds: No action for women on Day 1

The day started promising for sailors on the first day of the RS:X Worlds in Kerteminde, Denmark. The offshore wind was light but gusts were coming through as clouds passed overhead. However, as rain cells cycled through, the wind became too unstable to race, and the men's fleets were sent back to the beach and held. 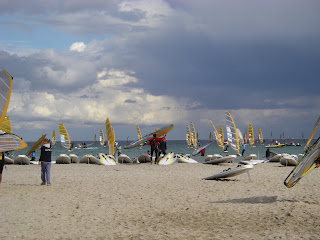 Men leave the beach
The women's start was scheduled for 1 pm, but was pushed back. We hung out in the competitors' tents all day, until the men were sent back out. The wind had clocked around to the opposite direction, and filled in but remained very light. After a period of waiting, the men finally got their races in, but it was too late for us. 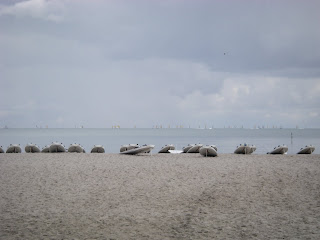 Women's boards ready on the beach
The forecast for tomorrow shows breezy conditions with the ever present rain, so we should be able to get in three races.
Posted by Farrah Hall at 3:32 PM