Lessons Learned: Life and sport come together at the RS:X European Championships

Sometimes, I think windsurfing has made me grow up a lot faster than any of the other years of my life. The sport has forced me to learn a lot about discipline, organization, culture, and has compelled me to tame emotional issues and accept my person and life as I create it. Of course, there are always life lessons to be taken from windsurfing competition. The first is to truly be happy even when your racing is awful and it’s too easy to judge yourself by your results. The second is that racing is dangerous, and following the rules is extremely important. In the end, it’s only sport, and sport comes second to lives at stake. 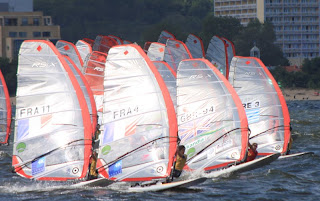 Lots of boards coming off the line

On the fifth day of racing, the breeze filled in to Sopot’s best conditions. 13-15 knots out of the northwest means clean wind, nice swell, and planing conditions. I was looking forward to racing as the conditions favored me, and for the first race of the day had a clean start (OCS as I would later find out) and went daggerboard down until I was on top of the fleet. I finished the first upwind planing and planed quickly downwind to the leeward mark. I dropped the daggerboard again as it was quite crowded and I wanted to get up into cleaner air. As I was rounding the mark, a competitor from Israel, Lee Korzits, who races really well and is fast in the breeze, rounded inside of me, a legal maneuver. I had left enough space around the mark, so we both completed the rounding. However, Lee was planing quickly and didn’t have a good angle yet, so she came to the inside of me quite close, couldn’t sail up higher, and it was difficult for me to bear off with my daggerboard down. Lee would have passed me unscathed, but her boom caught on my jersey and ripped it, catapulting her off her board and bringing both sets of equipment down on top of her. Lee tried to swim to the surface underneath the two sets of equipment and couldn’t escape. She panicked and screamed underneath the tangle of boards and sails. I jumped off and tried to separate the gear, but a quick-thinking French windsurfing coach sped up to the collision and dragged Lee out of the water. By then Lee had swallowed water and passed out, and they dragged her over the side of the boat as dead weight. The French coach revived her and brought her to shore with her equipment.

The incident terrified me. I dropped out of the race, sailed in to make sure Lee was all right, and wasn’t able to sail the rest of the day. In all sports, incidents such as this happen frequently, and remind us of the importance of the rules, but also of being conscientious and respectful of other competitors no matter your position, because human lives are precious. In the first incident, I was in the wrong and realized it but was unable to do anything about it, thus resulting in a collision and a penalty turn. In the collision with Lee, she was theoretically in the wrong, but because of the differing angles of planing and non-planing boards, was unable to sail higher. More conscientiousness on everyone’s part may have prevented both incidents, and the racing rules are made to create conscientiousness at any sailing event. 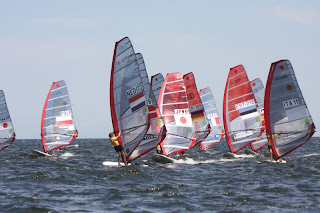 A port-starboard incident about to happen just after the start

Lee was unhurt and thankful to be alive. At the awards ceremony, she presented the French coach with a gift thanking him for his quick and heroic action. The story had a happy ending, but the impact of the lesson was severe for me: awareness and respect are critical in racing. Without it, human lives are endangered. I am able to remain optimistic about my progress in windsurfing, and the incidents at this regatta will make me a better and more conscientious racer in the future.