Light and shifty winds dominated the race area today, leading to a long and tedious day for most sailors. By late morning, a seabreeze of around 5-7 knots developed and the boats were sent to their courses. The RS:X women had the third start, after 2 fleets of men. After one general recall, we were able to start one race. The wind became progressively lighter throughout the race and extremely shifty. Eventually it went right, but during the last upwind, there were big shifts and boards gained and lost position radically. It was a difficult race for all the competitors in the dying wind, and the committee shortened the course by a leg in order to finish in time.

In general, difficulties abounded today as the fickle wind caused many delays. We were sent ashore after one race, and after waiting until late in the afternoon, we were sent back out again. The girls once again had the third start, and the wind began shifting and dying during our sequence. The start was postponed, and eventually we abandoned for the day without racing a second race. All the sailors were out until around 6:30 p.m. However, some of the boats, especially the Lasers, had an even longer day. They were still on their course long after the boards had come home. 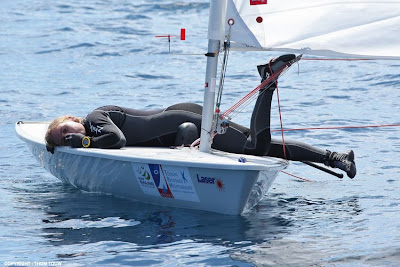 A Laser Radial sailor makes the most of waiting to race. (Event photo)
Leading the racing in the men’s yellow and blue fleets are Liwei Wu (CHN) and my Trials coach, Piotr Myszka (POL). In the women’s fleet, Maayan Davidovich (ISR), Blanca Manchon (ESP), and Hei Man Chan (HKG) are top three.

Our coach Christoph and I have been working on improving my pumping technique in light air. I have plenty of power, but it’s not being translated to the sail. I’ve been doing the same thing for years and although I have gotten some input previously, I’ve never been able to actually feel the correct technique. Now we are making some headway, and it will be interesting to see my progress during the next few days of expected light wind.
Posted by Farrah Hall at 5:58 PM