La Rochelle can be summed up by the following:  Hard to put together.  Everything from the logistics to the racing were just a bit complicated - although in the end, these complications made the entire experience worthwhile.

I had planned on doing La Rochelle for a few months.  However, a week before we were due to leave, my training partner suddenly couldn't make the event, and the accommodation we found fell through.  We were left scrambling to find a solution for a new coaching partner to share costs, accommodation, and a decision on a coach boat.  In the end, we drove from Cadiz with a few extra sailors on board, and towing a boat.  I finalized new accommodation the day before we arrived, in what turned out to be the best house ever - 3 bedrooms, next to the water, 5 minute walk to the venue, and most importantly, Internet!

I expected La Rochelle, on the Atlantic coast of France, to be quite cold and rainy, especially in November.  However, we were lucky enough to have some sun the first few days of training, all very light wind. 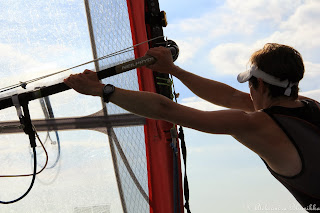 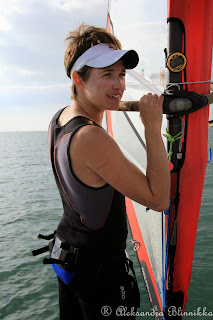 The Indian summer days soon were vanquished by a cold front, and the northerly, offshore wind came in strong and gusty.  We even had some rainy, light wind races that were even colder. 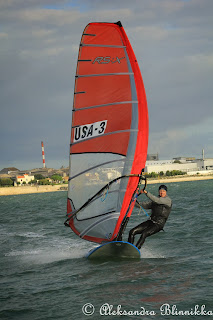 C-c-c-old. Heading out to the course
Because the wind was so shifty, racing was quite interesting and tactical, even in planing conditions.  The women's fleet was small but quality, 26 boards including a group of good French sailors, and a number of other top competitors from Poland, Italy, Spain, Germany, New Zealand, and Great Britain.  The conditions allowed me to work on some of the weaker aspects of my technique, and actually experience the importance of the tactical lessons of the last few months.

Like in Santander, most of my mistakes were positioning-related.  Because the wind was so crazy, it was easy to lose touch with the front group of girls if one made a mistake.  One or two signficant mistakes per race, and an 8th or 9th place could easily turn into a 12th or 13th.  My average finishes were around 9-14, but I did manage to fulfill my potential going into the event with a 3rd in the final race of the series, winning the start and the first upwind.  I was most pleased that I was starting extremely well without a single OCS, and that I was racing, really racing with good speed; not worrying about technique, but thinking strategically and tactically.  I had course awareness and and a lot of feel for what was happening during the race.

Girls' planing start
This event made me really appreciate the coaching I received over the last few months.  Racing is coming together for me, and a jump up the fleet is beginning to happen.  During training races, I am consistently finishing with the top girls, and my light wind performance has improved hugely.  Now I have to translate that to actual regatta.
The next month holds a trip home, more fund raising, and hopefully a trip to Cape Hatteras for some wave and flatwater shortboarding!
Posted by Farrah Hall at 11:57 AM No comments: