This video is an excerpt from Sperry Top-Sider's "Passion for the Sea" series, narrated by Gary Jobson. It was uploaded to YouTube by the new National Sailing Center and Hall of Fame in Annapolis, Maryland. The National Sailing Hall of Fame is honoring its first class of inductees on October 23, 2011.
Posted by Farrah Hall at 1:21 AM No comments:

At a training camp with the Polish youth team from Sopot. We've seen almost every kind of condition this week, from this windy extreme to very light wind and sunny weather.
Posted by Farrah Hall at 4:38 PM No comments: 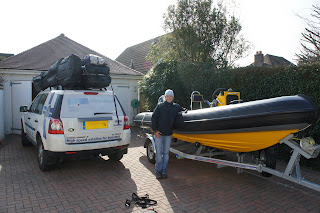 Life would be a lot easier if someone took over the responsibility of planning my campaign, and all I had to worry about was training and racing. However, like the majority of Olympic hopefuls who don't have a team of support personnel, planning, logistics, and budget management falls squarely onto my shoulders.

Without missing a beat, the day after the Rolex Miami OCR, I attended a USSTAG meeting to learn about what they had planned for us regarding training camps, logistics, and coaching. As is the norm, the boards are the least-funded Olympic class, and only $10,000 is allocated for our coaching budget, a total of two regattas for both men and women RS:X sailors. (All the other boat classes have coaches for most of the World Cup events.) With this shortcoming in mind, I set to work raising money for my own program.

Most Olympic-class sailors are well-aware that full-time coaching is an absolute necessity. Without constant feedback, analysis, and support on the water, jumping into Olympic-level training and competition is frustrating and difficult. All the top teams have a fully-planned schedule with a national coach, and most sailors wouldn't think of heading out to a serious training session without this support. In order to compete with the best, my resources must be at the same level, or better, in an innovative way. Both coaching and the logistics of including a coach are expensive and time-consuming, and I can't say that I've exactly found the most innovative solution for myself, but that the resources have come slowly together over the past few years and I'm now in a position to have a coaching program for the spring World Cup regattas.

After the Miami OCR, I spent the entire month of February pushing single-mindedly to get funding. I've applied for a few more grants, and spent a lot of time following up with prospective donors. In some ways, I'm "counting chickens before they're hatched" in that I don't have my full budget, but I'm expecting my efforts to pay off, and put me in the best position possible to make good results for the USA at the early World Cup events, our first Olympic Trials event, and score the boards more funding for the 2016 quadrennium.

Apart from fund raising, my next challenge was organizing a coach boat, transport, housing, and other necessities for three months in Europe. Appraising my budget, the first glaring expense was coach boat charters - almost $30,000 a year to charter a boat at each event, plus a major hassle sourcing these boats. Through creative financing / deficit spending, I've been able to acquire a coach boat for this season. Given the fact that a boat costs much less than $30,000, and finding boats can be stressful, buying a boat was almost a no-brainer, although very difficult, decision. Being a frugal person by nature, I'm tortured by expensive decisions!

I was very pressed for time in February from all the fund raising, some training in St. Petersburg with our youth team, and getting very sick for a week. This made it necessary to acquire the boat sight-unseen in the UK, and prepare my van, also in the UK, from afar. This required some acrobatics. Luckily, a very generous friend from Hayling Island, UK, picked up my van from Weymouth, had the oil changed, and installed a tow bar. The friend also inspected a boat I found online, approved it, delivered it, and found a really nice trailer and covers for it. I'm really excited about my boat, which is a Solent RIB, made by a local company for the south coast of the UK. Not to mention, it has a nice, efficient engine, and very pretty colors! 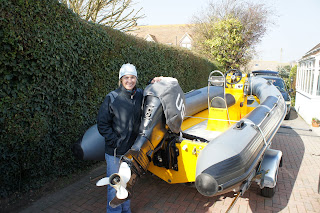 Very happy about the new boat
After picking up the boat and running around for a few days at Hayling Island to insure and register it, I was ready for the road. One ferry ride and 1,500 miles later, van, boat, and I were safely at our next destination in Cadiz, Spain, where I will be training for the next two weeks with a few teams from Poland. Driving 1,500 miles in the US is relatively easy on our interstate system, but over here, the same distance takes almost twice as long. Slower speeds, toll highways, winding roads and massive hills make driving much more difficult (and expensive!). Luckily, I was still adjusting to the time difference, so it was easier to stay awake at night. Adding to the ordeal was my GPS, which took me on a few boondoggles, and had me in hysterics with its arrogant directives and mispronunciations of place names. A few lessons my dad taught me about vehicles came to good use on this trip: drive slowly and gently, check the oil and fluids at every stop, and check over the rig carefully. Although I was obsessively careful, my hard-working, 14-year-old minivan suffered; the transmission is definitely on its way out and it's riding pretty rough. With a little TLC it should at least live through the season. It's survived multiple trips across, up, and down both coasts of the USA, and laps around North Europe...it can't quit on me now! 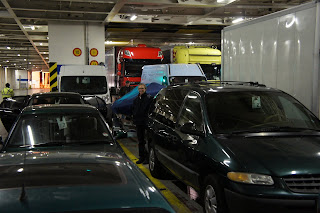 Van and boat, on a bigger boat 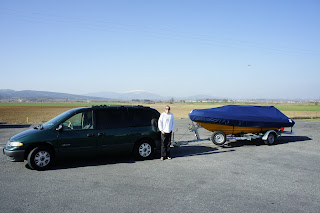 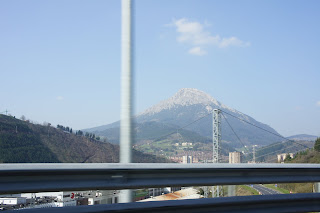 Bridges through the Pyrenees
Although I had a rough drive, the Polish drove almost twice as far and arrived in Cadiz, in the middle of the night, like the walking dead. During that night, a huge party (for Carnaval) raged through the marina and a few drunken revelers decided it would be a good idea to take bikes from their trailer and ride them around. Luckily, the police were on hand to apprehend the thieves and the bicycles!

I'm really excited to be here in a very beautiful town with an impressive sailing facility, training with an excellent team. I'm working with one of the coaches from the Sopot Sailing Club, and some fast younger sailors. Joining us will be some of the women on the Polish National Team and their coach. I'm looking forward to some pretty intense on-the-water sessions and being around a great group of people I consider to be my teammates.
Posted by Farrah Hall at 4:30 PM 1 comment: